"Empowering the Americas and Houston through Trade & Investment"

August 26, 2019
Partnership Tower
Registration
The Houston region is the #1 partner with seven of the top twelve Latin American economies. Sectors like oil and gas, biotechnology and life sciences, manufacturing, transportation, logistics, medical services, agriculture & livestock, tourism and others are highly compatible with the Americas and the one and a half million Spanish-speaking population makes it the ideal "Gateway to the Americas".

To highlight this impressive asset, the Ibero America Consular Group of Houston (GRULAC) and the leading business organization of the region, Greater Houston Partnership (GHP), have joined forces to organize "Houston: Gateway to the Americas 2019". This one-day event will take place at GHP's Partnership Tower on Monday, August 26 from 8 AM to 6 PM and will include an array of  discussion panels and keynote speeches covering and extensive business agenda.

The initiative is be supported by consulates of Ibero America in Houston, bi-national and regional chambers of commerce and will highlight presentations by the private and public sector of Houston and the Americas.

​There are nineteen Spanish & Portuguese speaking countries in the Americas totaling 630 million people. Their trade with the United States is $872 billion a year, 21% of total U.S. trade, with the United states having a positive trade balance of $53 billion. Spain & Portugal add 56 million people and $36 billion in trade.

This trade is important for the economy of the United States, both in exports and imports. Houston is one of the most important metropolitan regions in trade with the Americas together with New York and Miami, led by the Port of Houston, the largest port in the U.S. in foreign tonnage. Besides having a large attractive market with a high proficiency of Spanish-speaking population, Houston is positioned to become the "Gateway to the Americas" for the central region of the United States, deeply connected to Houston and Texas by an impressive infrastructure of roads and railroads.

The airport system of Houston is another asset of the region. With Houston Intercontinental having direct flights to most capitals in the Americas, supported by United Airlines' headquarters for Latin America in Houston and the marketing agreement with COPA Airlines in Panama, Houston enjoys an excellent connectivity with countries and cities of the Americas, especially with Mexico with more than forty destinations. The new international role of Hobby Airport with Southwest Airlines leading the way adds to the connectivity of Houston.
​
Another important factor in favor of Houston is its leadership in several economic sectors that are also important to the Americas, making it an attractive city and region to do business. Therefore, there is no reason why the Houston region could not aspire to become the "Gateway to the Americas". The conference is designed to highlight these opportunities but it will require the active participation of all sectors to accomplish this goal. GRULAC and GHP, with this conference, are providing a leadership role that is destined to bring about positive results.

Houston’s status as a global city is reflected in the strong international representation in the city:​ 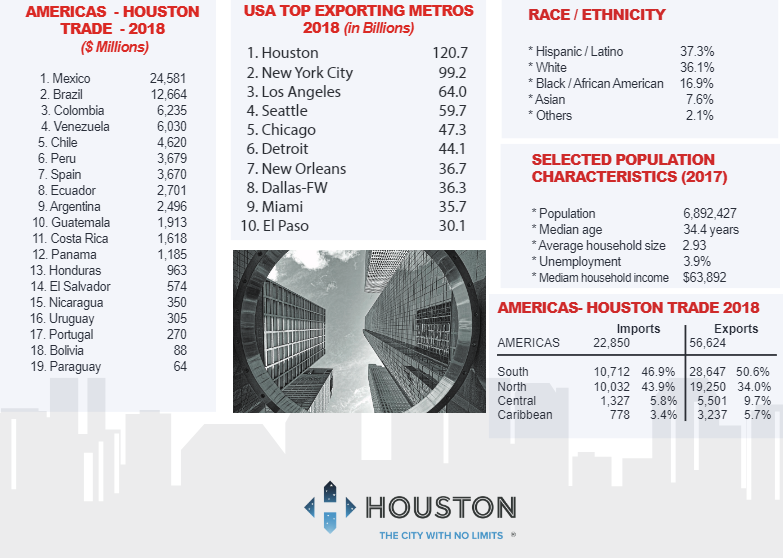