HOUSTON GATEWAY OF THE AMERICAS IV
​

​Dear friends of Houston and Ibero America
The Houston region, with its economic power and extensive latino population, has become an integral part of the relationship with Ibero America, making it a natural gateway for the hemisphere, as proved by being the #1 trade partner with eight of the top twelve economies of the hemisphere. In addition, its leadership in key economic sectors such as oil & gas, manufacturing, transportation, logistics, life sciences, agriculture & livestock, aerospace, banking, tourism and others, all sectors important to Ibero America, reinforce the need to work together, promoting opportunities that are offered.
To advance the agenda, GCI (Ibero America Consular Group) and GHP (Greater Houston Partnership) have joined efforts to organize the fourth version of “Houston: Gateway of the Americas” conference that will be held on Thursday, December 2, at the Partnership Tower located at 701 Avenida las Americas, suite 900. The one-day conference will start with a continental breakfast at 8:30 AM followed by Bob Harvey, President & CEO of GHP, who will do the welcoming remarks. In the morning there will be four discussion panels covering different topics followed by a luncheon with a Keynote Speaker. The afternoon will have four more discussion panels finalizing at 4:30 PM with a dialogue discussing the day’s activities and a reception. Consuls of Ibero America and executives of GHP will exchange views with leaders of the public and private sector from Houston and the Americas.
Enclosed you will find the agenda of the conference, the sectors that will be included, sponsorship levels & benefits, and trade statistics. All sponsors will have the opportunity to participate actively in the program. There will be limited space at the conference, therefore the sponsorships will be handled on a first-come-first served basis.
We invite you to participate in the “Houston: Gateway to the Americas” conference and be part of this growing and vital relationship between Houston and Ibero America.
Best personal regards,

The Houston region is one of the most important metropolitan regions in the United States, ranking sixth in GDP and #1 in exports. In addition, is considered the most diverse metropolitan region in the country, with strong presence of Hispanics (38%), White (36%), Blacks (17%), and Asians (8%). It consists of nine counties: Austin, Brazoria, Chambers, Fort Bend, Galveston, Harris, Liberty, Montgomery and Waller. 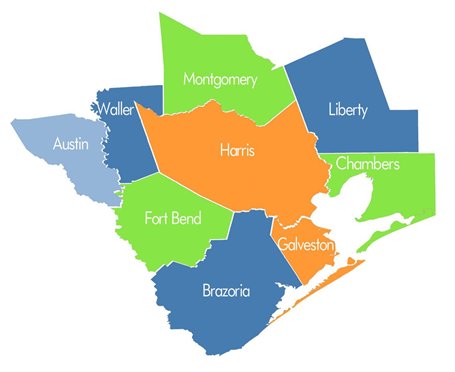 ​There are nineteen Spanish & Portuguese speaking countries in the Americas totaling 630 million people. Their trade with the United States in 2019 the last full year before the pandemic reached $896 billion a year, more than 20% of total U.S. trade.

This trade is important for the economy of the United States and the Americas, both in exports and imports. Houston is one of the most important metropolitan regions in trade with the Americas together with New York and Miami, led by the Port of Houston, the largest port in the U.S. in tonnage. Besides having a large attractive market with a high proficiency of Spanish-speaking population, the Houston Region is positioned to become the "Gateway of the Americas" for the central region of the United States, deeply connected to Houston and Texas by an impressive infrastructure of roads and railroads.

The Airport System of Houston is another asset of the region. With Houston Bush Intercontinental having direct flights to most capitals in the Americas, supported by United Airlines' headquarters for Latin America in Houston and the marketing agreement with COPA Airlines in Panama, Houston enjoys an excellent connectivity with countries and cities of the Americas, especially with Mexico with more than forty destinations. The new international role of Hobby Airport with Southwest Airlines leading the way, adds to the connectivity of Houston with the Americas.
​
Another important factor in favor of Houston is its leadership in several economic sectors that are also important to the Americas, making it an attractive city and region to do business. The conference is designed to highlight these opportunities, led by the active participation of GHP and the Ibero America Consular Group.. GCI and GHP, with this conference, are providing a leadership role that is destined to bring about positive results.

Houston’s status as the most global Region/City in the United States based on the metric of GDP vs exports, is reflected in the strong international representation in the city:​

Strengths of the Houston Region 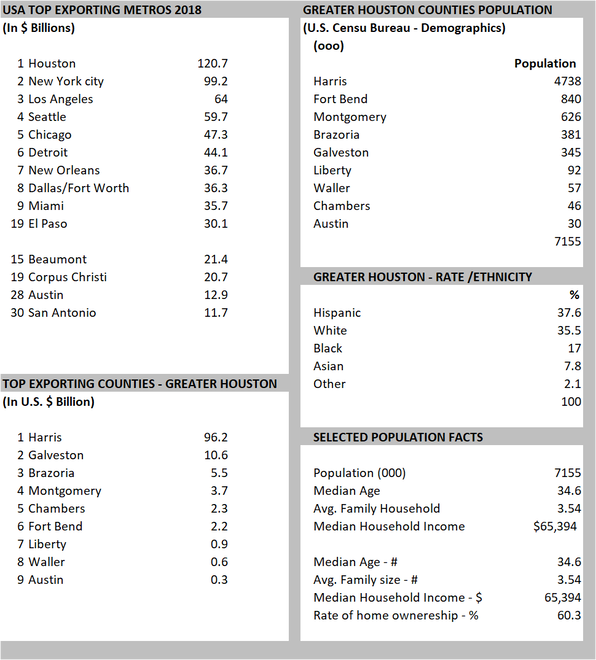